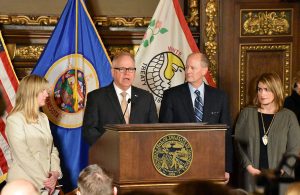 This article appeared as part of a monthly feature in the AMSD Connections member newsletter.

The Minnesota Constitution makes it “the duty of the Legislature to establish a general and uniform system of public schools.”

Accordingly, education accounts for more than 40 percent of Minnesota’s state budget — and the final 2019 E-12 Education bill, which was signed into law by Gov. Tim Walz on Thursday, May 30, appropriates $20.1 billion for public education from a total budget of $48.4 billion for the next biennium.

Getting there was not easy.

With Minnesota having the only divided Legislature in the country, the significant divide between the DFL-led House of Representatives and the Republican-led Senate in 2019 was not surprising. The differences were apparent in virtually every area of the state budget including E-12 Education.

The House’s initial omnibus E-12 Education bill proposed a $900 million funding increase and a comprehensive list of policy changes. The Senate’s omnibus bill, meanwhile, was much more modest, both in terms of funding and policy proposals. 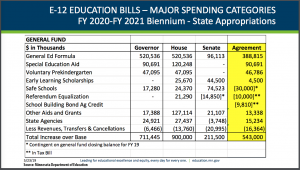 Near the end of the session — when the Senate and the House came together as a Conference Committee to negotiate a final bill — it became clear the respective chambers were not going to agree easily.

And that’s just one reason the regular 2019 Legislative Session ended without a final budget agreement — requiring a one-day Special Session beginning Friday, May 24.

But while the media focused on the all-night Special Session marathon for the final budget votes on Saturday, May 25, the reality was the E-12 Education budget was largely decided nearly a week before, on the last day of the 2019 session.

That was the day Gov. Walz, Speaker of the House Melissa Hortman and Majority Leader Paul Gazelka struck a deal on the major provisions of the E-12 bill. Following that agreement, the E-12 Conference Committee, led by chairs Rep. Jim Davnie and Sen. Carla Nelson then put the finishing touches on the $543 million bill.

The key provisions in the bill include: a 2 percent per-year formula increase; increased funding and reform of the special education formula; VPK/School Readiness Plus funding for two more years; school safety and some property tax equalization in the tax bill. The final bill includes little in the policy arena beyond some requirements related to dyslexia screening, testing for lead in water and some reductions in required special education paperwork.

Heading into the 2019 session, the AMSD Board of Directors identified a series of recommendations aimed at ensuring equitable academic outcomes — high levels of achievement — for all students. Here’s how the final numbers broke down with regard to key AMSD Priorities:

The following priorities identified by AMSD were not addressed in the 2019 omnibus E-12 Education bill: